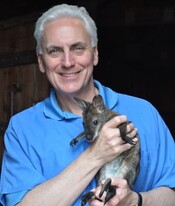 Driven by a passion to inspire people to connect with animals and understand the importance of conservation, John Walczak has devoted his entire career to supporting and advancing the missions of professional zoological institutions.

That devotion tracks from his early days at the Palm Beach Zoo to his time as a supervisor at the Oklahoma City Zoo through his move to the Louisville Zoological Gardens in 1985. While there, he supported the design and construction of the HerpAquarium and curated the ectotherm department. As Assistant Director at Louisville (1992-2003), John was instrumental in the design, construction, and openings of some of the Louisville Zoo’s signature exhibits such as Islands and Gorilla Forest, both of which were the AZA’s highest-scoring, award-winning exhibits in their opening years.

As Director from 2004-2021, John helped raise more than $44 million for capital projects, including $26 million for Glacier Run, which was recognized as the 2012 AZA Exhibit of the Year and which grew attendance by 20%. The Louisville Zoo also received the AZA’s Excellence in Education and International Conservation awards under John’s leadership. John’s commitment to conservation lives on through the Louisville Zoo’s conservation fund, which he created to support front-line conservation work.

John has served on many local boards including the Partnership for Creative Economies, the Arts and Cultural Attractions Council, Louisville Downtown Rotary Club and Indiana University Southeast. He is active in the AZA, having served on the Ethics Board, the Accreditation Commission, and the Board of Directors, as well as chairing the Membership Committee and Honors and Awards Committee.

John graduated from The Pennsylvania State University. He currently resides in Louisville.